Center for Contemporary Indian and South Asia Studies and Services

On 1 October 2015, India submitted its INDCs to the UN. The ambitious goals set by the Narendra Modi government have no doubt silenced its critics. However, to achieve these lofty goals, India needs a paradigm shift in the kinds of business and development models it encourages.

“Unto Heaven be Peace, Unto the Sky and the Earth be Peace, Peace be unto the Water, Unto the Herbs and Trees be Peace” – Yajur Veda 36.17

India’s Intended Nationally Determined Contributions (INDC), submitted to the United Nations Framework Convention on Climate Change (UNFCCC) on October 1, opens with this peace prayer[1]. The spirit of this Vedic invocation and the ambitious carbon emissions targets outlined in the document raise the level of the challenge to which India has now committed itself to.

Can these goals be met without a paradigm shift in India’s modes of industrial activity? This is now the key question.

India’s high targets of reducing greenhouse gas emissions by a third of 2005 levels in the coming 15 years, have certainly helped to  push back the  critics who have long  accused the country of shirking its responsibility on climate action.

However, so far, India’s climate strategy is within the conventional frame – revolving around expansion of renewable energy, deployment of clean coal power generation, reduced emissions in the transportation sector, energy efficiency and afforestation.

Effective implementation of even this framework of solutions is in itself a herculean task. But it is in the sphere of afforestation, for which ­which both  China and India have set impressive targets – that India’s goal, given our size, is far more ambitious.  India has set itself the task of undertaking enough afforestation to create an additional carbon sink of 2.5-3 billion tonnes.

The best way for India to achieve its afforestation goals is to utilize a combination of government and private funding for social enterprises that can enable forest dwelling people to increase green cover in ways that will enhance their livelihoods through sustainable harvesting of forest produce.

The hardest test for the government’s promise to increase forest cover will be in areas that are rich in mineral resources, like the controversial Niyamgiri hills of Odisha, where the local tribals voted against a bauxite mine and aluminum plant. The solution lies in enforcing ecologically responsible mining practices to minimize damage, and later restore forest cover after the minerals have been extracted. For this strategy to succeed, a combination of political will and enlightened private sector initiatives will be necessary.

But this is not enough. India must strive for a paradigm shift in the kinds of business models it encourages. This is a must if the country wants to lead the world in dealing with climate change and meeting the Sustainable Development Goals (SDGs).

For instance, India’s commitment to convert approximately 40% of its electricity consumption to non-fossil fuel sources by 2030  can be met by the creation  of gigantic wind or solar farms that feed into an electricity grid. However, this is likely to cause new environmental problems which might cancel out the gains of the renewable energy – for example the devastation of local vegetation and hillsides by some kinds of wind-energy farms[2]. Alternatively, India  can promote de-centralised generation, storage and use of renewable energy, some of which may include small grids. This will  not only make large segments of the population self-sufficient in energy, but  the manufacture, installation and maintenance of these systems can potentially generate the  millions of jobs that the government has promised.

If this big push for renewable is accompanied by a move towards a decentralised industrialisation based on ‘closed loop systems’–  where most wastes become resources for some other industry – then India can become the leader in sustainable and equitable development. For example, ACIDLOOP, a project supported by the European Union (EU), enables small and medium enterprises (SMEs) across India to introduce systems which minimize waste and improve energy efficiency in metal finishing companies[3]. The government must keep such plans at the forefront of India’s strategy for the Paris Climate Summit in December. While individual INDC submissions have been lauded, the promises made by 119 countries to the UNFCCC are yet to be analysed and co-related. The UNFCCC secretariat is now in the process of calculating the aggregate effect of all the INDCs submitted to it. This report will be released 1 November, 2015.

Environmental analysts warn that the aggregate effect of all the INDCs may not succeed in restricting global temperature increase to below 2 degrees – as required by the Intergovernmental Panel on Climate Change[4,5]. In that case the negotiations in Paris are poised to be a cliff-hanger – with environmental scientists and activists pushing governments to commit to a more rapid shift away from fossil fuels.

It is thus vital for India to take the lead in working for a paradigm shift towards new models of industry and business, one that will be compatible with the spirit of  the lofty invocation at the start of its INDC document. Primarily this will involve a shift towards production systems and life-styles based on frugality, simplicity and ingenious maximisation of natural resources. 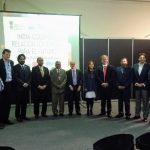